All too often, film criticism falls victim to what I call the “Oscar Eyes” phenomenon, prioritizing showy performances and actors who make noticeable physical commitments to their characters over work that’s subtle but no less critical to a movie’s effectiveness. Below, here’s my attempt to look beyond the performances likely to be up for awards. These performances are on the margins of Oscar consideration for several reasons: either they’re in movies that rarely attract awards attention, or they’ve been overshadowed by performances with more obvious “award-bait” moments. They’re worthy of recognition nonetheless.

With his gaunt physique and slick mannerisms, Jake Gyllenhaal owns Dan Gilroy’s feature directorial debut, but the movie’s beating heart lies with Ahmed. His Rick is largely subordinate to Gyllenhaal’s Lou Bloom until Lou takes his video news ambitions one step too far. As the true nature of Lou’s crimes dawns on Rick, the burgeoning intensity of Ahmed’s characterization emerges as the movie’s most sympathetic creation.

If you’ve just seen the commercials for this movie, I forgive you for expecting it to be the latest in a long line of soulless Tom Cruise vehicles. Doug Liman’s sci-fi comedy proves far more potent, complex and satisfying, and Emily Blunt plays a major role in its success. Cruise is at his blankly charming best in a role that sends up the self-seriousness of which he is often accused, but Blunt plays the movie’s true action hero. She makes a strong case for her ability to topline an action movie of her own, stat. With luck, it will be as good as this one.

Bradley Cooper, Guardians of the Galaxy

If Cooper gets an Oscar nomination this year, it will be for his performance in Clint Eastwood’s American Sniper. Perhaps the Academy ought to give Marvel’s funniest movie yet a second look, though. The onetime Sexiest Man Alive sheds the pretentions of a two-time Oscar nominee and delivers an original, nuanced and thoughtful characterization of Rocket Raccoon. And if you ever thought you’d read that sentence, you have better foresight than I.

The writer-director team of Phil Lord and Chris Lord scored two of the year’s most successful Hollywood movies with critics and audiences. The Lego Movie managed to transcend its corporate-minded origins with a story that walked a fine line between brand management and convention demolition. Just a few months later, 22 Jump Street beat the sequel curse both by acknowledging the uphill battle it faced in comparing to its predecessor, and by emphasizing two comedic performances that danced a glorious comedic waltz with the central duo of Jonah Hill and Channing Tatum. Ice Cube’s indignation at the news of his employee sleeping with his daughter built and built like a symphony. Bell, meanwhile, brought subversive to Mercedes, who matched Schmidt’s discomfort with gutsiness in the movie’s standout scene.

Adam Driver, This Is Where I Leave You

This movie collapses under the weight of its starry cast, but it’s still fun to watch beloved actors bounce off each other, especially burdened with the responsibility of mimicking the inimitable rhythms of a family. Driver’s droll line readings shouldn’t have worked in context of this drippy sitcom plot stretched to feature length, but the future Star Wars villain has never met a movie moment he couldn’t hijack with his manic energy.

Here’s another surprise. I’ve always considered Efron to be a pretty boy whose six best features are all on his chest. (Okay, he has a nice face too.) But Nicholas Stoller brings something out of him in this thoughtful, funny comedy of clashing lifestyles. When Teddy Sanders looks wistfully upon the history of his fraternity, the emotions feel organic to the story rather than tacked on for cheap pathos. This performance succeeds because, like Cruise in Edge of Tomorrow, it sends up a celebrity persona in a way that allows the celebrity to be in on the joke and eager to participate.

The title betrays Eisenberg’s achievement – he plays two distinct versions of the same tinny-voiced twenty-something with equal commitment. Even while wearing the same clothes and rocking the same hairstyle, Simon James and James Simon are immediately distinguishable, a testament to Eisenberg’s subtle modulation of his central character’s clashing duality. 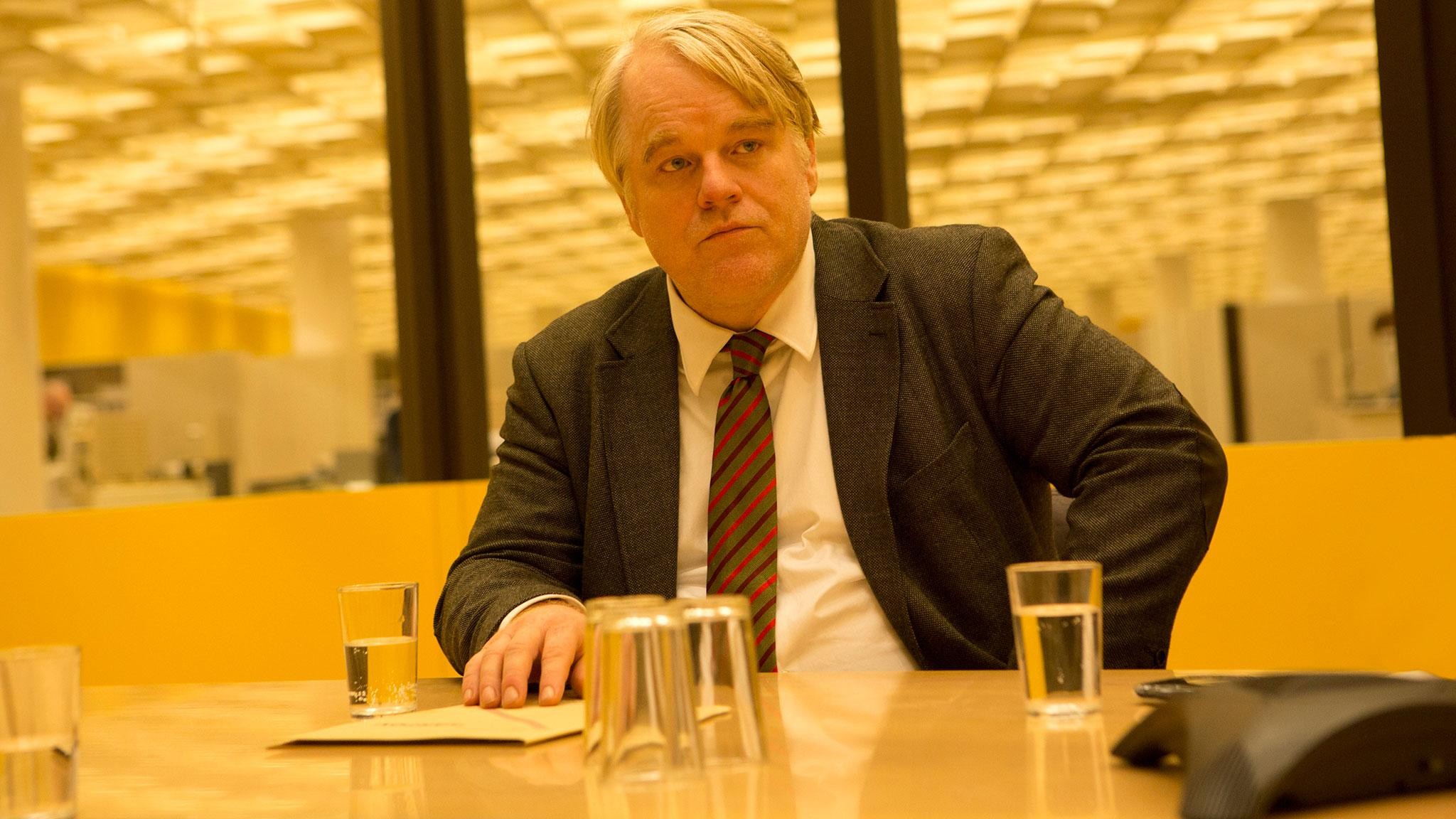 It seems silly to put Hoffman on a list of actors who likely won’t be nominated for Oscars. After all, he’s now a member of the melancholy club of actors who died before they had put a cap on their best work. But A Most Wanted Man seems to have receded from awards consideration. Too slow? Too dense? Too quiet? Perhaps. But Hoffman’s performance here is an all-encompassing reminder of his formidable talent. He spends 95% of the movie in stoic mode, calmly looking on as the world crashes down around him. But in the last sequence, he lets go, and you can practically hear the snap of the rubber band breaking. It’s fitting that Hoffman’s final starring role showcases his restraint and still manages to send him off with a big moment worthy of his stature.

Andy Serkis and Toby Kebbell, Dawn of the Planet of the Apes

Quick: do you remember any of the actors who actually appear onscreen in this satisfying sequel to the reinvigorated Apes series? Jason Clarke, Gary Oldman and Keri Russell may have had top billing, but the movie belongs to Kebbell and Serkis, who marry virtuosic technological feats with a dizzying array of emotions as Caesar and Koba, whose opposing philosophies set the epic conflict in motion.

In casting his young daughter in his 12-year passion project, Richard Linklater risked raising questions of ethical responsibility – after all, it’s equally plausible to imagine that Lorelai wanted nothing to do with her father’s profession. But his gamble paid off. Lorelai Linklater delivers a performance of attention-seeking, self-absorbed adolescence so convincing as to be grating. The brilliance of her performance – much of it probably unintentional – is evident from the moment Samantha makes her screen debut with a saccharine cover of Britney Spears’ “Oops, I Did It Again!” She’s every teenage boy’s worst nightmare: younger sister as cute monster.

Somebody hook this dude up with a franchise of his own. It’s practically criminal that he doesn’t have one already. What does a black actor have to do to earn a spot among Hollywood’s superhero elite? Play James Brown and Jackie Robinson, apparently. Chadwick Boseman aside, Hollywood is sorely in need of more black leading men – Idris Elba is only human, after all. They already exist, though, and Mackie is at the top of the list.

Elisabeth Moss, The One I Love

To reveal the achievement of Moss’ performance in this unsettling thriller would be to spoil the movie’s delicious surprises. Suffice it to say that Peggy Olson is nowhere to be found in Moss’ fatigued wife or the liberated alternative that follows.

Director David Fincher’s adaptation of Gillian Flynn’s novel (from a screenplay by Flynn herself) is chock full of charismatic performances and striking imagery. Ben Affleck arguably does his career best work playing a suburban husband version of the Hollywood persona he just recently shook off. Kim Dickens and Carrie Coon provide different shades of female rationality in a movie that regards masculinity as corruptive. And Rosamund Pike’s Cool Girl speech alone vaults her performance to the year’s elite. But the biggest surprise is Perry, in his highest-profile departure yet from his own production machine. Tanner Bolt is a confident, polished blast of comic relief in a movie that digs deep into the dark underbelly of American culture.

Pundits have already groaned that this year’s Best Actress race is the least crowded in recent memory. Reese Witherspoon, Rosamund Pike, Julianne Moore and Felicity Jones appear to be locks by default, and the list of next-tier contenders is equally obligatory. Perhaps the Academy isn’t looking in the right places. The SNL outcast is convincing and tough as a stand-up comedian who decides to get an abortion after an ill-advised one-night stand. She holds the movie’s slight foundation together with her abundant charm and unusual energy.

Much ink has been spilled about the terrifying aggression of J.K. Simmons’ performance as Terrence Fletcher, the villainous jazz instructor with an abusive streak. But that praise seems to have come at Miles Teller’s expense. As the talented but impressionable drummer Andrew Neyman, Teller manages to make the character’s difficult transitions into unlikability both natural and inevitable. Plus, the drumming, central to the movie’s complicated notions of artistic ambition, is Teller’s own.