This list is exactly what it looks like: a list of one great episode in each of twenty shows that I watched this year. I could have filled the entire list with episodes of The Americans and Hannibal, but I decided to impose a limit of one episode per show. This list is different from a list of my favorite TV shows of the year, though there’s plenty of overlap between the two. And if it’s not on this list, I either didn’t like it, liked it but preferred other things, or didn’t watch it.

And now, in chronological order, twenty of my favorite TV episodes of 2014.

For a show that generated seemingly endless conversations and passionate declarations of love during its first few seasons, it’s surprising to see that the TV critic world has largely moved on from Community, which will return for a sixth (!) season on Yahoo early in 2015. The fifth season, the show’s last on NBC, lifted the show out of its Dan Harmon-less doldrums, particularly with this episode, a spiritual sequel to season two’s brilliant “Cooperative Calligraphy” and a surprisingly moving farewell to Chevy Chase’s now-deceased misanthrope Pierce Hawthorne.

I confess that I haven’t tuned into the second season of Fox’s wonderfully weird fantasy series, mostly because critics I trust have lamented the show’s fall from grace. I’m too enamored with the first season, and this finale in particular, to risk spoiling my affection. I couldn’t begin to explain what happens in this finale, but I know that it ends with a dazzling blast of cliffhangers that paid off the season’s conflicts and set up interesting ones for the future. 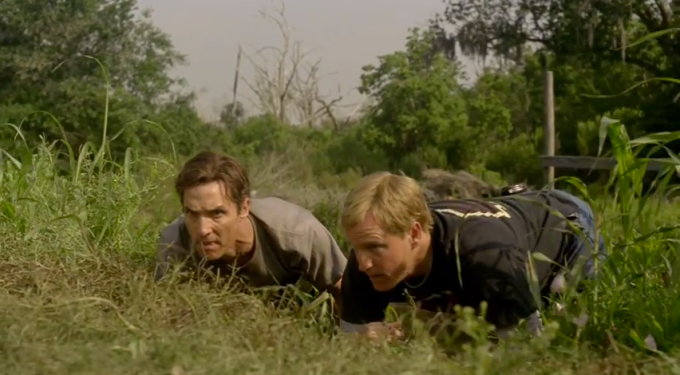 After this episode, the first season of HBO’s anthology series grew more conventional, abandoning its unique temporal construct for a straightforward story of cops versus criminals. But this episode played with time and memory in fascinating ways, packing narrative revelations and emotional complications aplenty into a visually tricky hour that demanded close attention.

For seven of its eight episodes, this fledgling HBO half-hour explored the experiences of four gay men in San Francisco, exposing their flaws and accepting their humanity. This fifth episode departed from the show’s established structure by focusing in on the budding romance between Patrick (Jonathan Groff) and Richie (Raul Castillo). Sexually frank, emotionally complex and visually sumptuous, this half-hour recalled Richard Linklater’s film Before Sunrise and showcased a new facet of the show’s ambitions.

Neil DeGrasse Tyson’s poignant monologue about his personal connection to original Cosmos auteur Carl Sagan is enough to put this episode on my list. The dazzling special effects, earnest tone and intellectual ambition of this premiere episode puts it over the top.

I almost picked the “Fred Willard in space” episode or the “Forrest tries racism” episode, but I ultimately went with the show’s third episode, which provides perhaps the strongest and most complete example of the show’s unique blend of tones. The episode begins innocently enough, with Forrest gorging on 15 pancakes in a local diner, but the laughs quickly turn into gasps as Forrest is forced to confront the reality of divorce, all to uphold the promise he made to his beloved show. Andy Daly and Jessica St. Clair deliver on the squirmy potential of that scene, and director Jeffrey Blitz wisely lets the drama play out organically instead of forcing more laughs. No episode of television encompassed a wider swath of emotions in 2014.

It’s a testament to the strength of this second season that I would have been happy to pick any of the thirteen episodes that aired this year. This one sticks out in my mind, though. The sexually competitive nature of Philip and Elizabeth’s relationship climaxes in one of the most uncomfortable and dramatically revealing sex scenes I’ve seen on television. Plus, this episode features the return of Margo Martindale as Claudia. Awesome.

While it might never reach the comedic and dramatic heights of its second through fourth seasons, NBC’s beloved sitcom set in the charming town of Pawnee, Indiana remains a pleasurable component of any TV fan’s roster. But this season finale did a lot of work to show that there’s still gas left in the tank. It would have served as an enormously satisfying series finale, closing out many of the show’s ongoing gags, until the surprise tag, a flash-forward to several years in the future that leaves more questions than it does answers about the show’s final season.

After three seasons of nearly unmitigated critical adoration, the Louis C.K. backlash erupted in 2014. And indeed, C.K. took his show in strange and occasionally frustrating directions in its fourth season, devoting perhaps one too many episodes to a serialized courtship between Louie and a Hungarian woman who spoke no English. But this episode, positioned right before the six-episode mini-movie, represents Louie at his most ambitious, as his writing tackles the issues of female body image and male privilege. C.K.’s wisest move is to let Sarah Baker, a gifted actress who gets one heck of a clip reel feature here, take center stage with a moving speech that tears down some of the male fantasies that C.K. has long been accused of perpetuating. 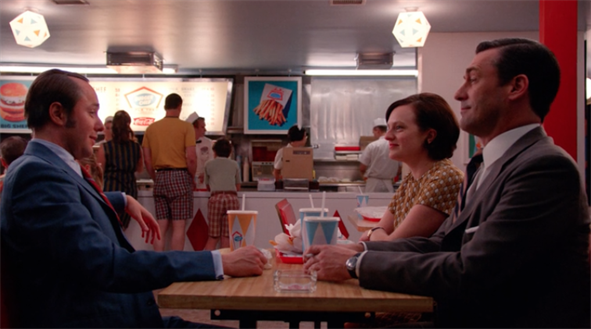 Just before the end of its bifurcated seventh season run, TV critics’ former golden boy delivered two of its best and most affecting episodes to date, starting with this one. Bob Benson returned in a devastating storyline that ended with a painful moment of rejection from the kindhearted Joan. Pete and Trudy came to blows over Pete’s latest sexual mishaps. And Don and Peggy…few words can describe the long-term power of their slow dance to Frank Sinatra’s “My Way.” This spiritual cousin to “The Suitcase” ended with Don, Peggy and Pete forming a makeshift family in a fast-food restaurant, fulfilling the sanitized image of America they help to construct.

Creator Noah Hawley’s elegantly structured remix of the Coen Brothers’ 1996 masterpiece cleared a new peak at the end of this riveting fourth episode, which climaxes in a tense snowbound shootout that leaves the fate of the show’s major characters in doubt and sets up the remaining episodes’ central conflicts.

After a delirious, grotesque season, TV’s sickest show delivered an elegantly shot finale that closed the loop on the flash-forward from the season premiere, resolved the ongoing mystery surrounding Will Graham’s mental stability, and left most of our characters lying bloody on the floor as Hannibal took off for Italy. Season three can’t come quickly enough.

With just eight episodes to find its footing, satirical filmmaker Mike Judge’s tech-infused comedy has room to grow in season two, particularly when it comes to showcasing women. But if it can deliver as many laughs as the season one finale did, the show will be in very good shape. The lengthy dick joke is the episode’s profane centerpiece, but Jared interrogating people on the street is almost as priceless.

In truth, most episodes of this season could have qualified for this list. I picked the one that features the shocking revelation that sweet, funny-accented Lorna Morello (Yael Stone) is severely unstable, constructing memories of a fiance who never existed except as an object of Morello’s non-mutual obsession. This episode also sets the stage for Vee’s drug-fueled prison takeover and introduces yet another sex-positive plot in which Boo and Nicky engage in a contest of sexual conquests.

Note: This show is now available to stream free on Netflix.

The second season of Sundance’s slow-moving exploration of the human psyche ravaged by imprisonment and accusations of criminal acts was deeper, darker and weirder than the first season. This season premiere brought the show’s empathy and surrealism to the forefront, culminating in a final dream sequence that was as poignant and significant as it was bizarre.

It’s a shame that former Fox executive Kevin Reilly reportedly had it out for this show, going against the wishes of everyone else who works at the struggling broadcast network. With the right combination of promotion and patience, Enlisted could have been the broadly appealing hit the network so desperately needs. Instead, it’s in the “one-and-done” club. No matter, though. This season finale is poignant and touching in ways that most dramas struggle to achieve, thanks to wonderfully specific writing and vulnerable performances from Keith David and Geoff Stults. The beach scene at the end serves as a beautiful farewell to a warm-hearted series that never found its commercial footing.

It didn’t take long for John Oliver to distinguish himself from his former employer Jon Stewart. With topical and in-depth monologues that stretched to as many as fifteen minutes, Oliver positioned himself as equal parts investigative journalist and comedic observer. This combination was perhaps no more impressive than in the week following the death of Michael Brown and the subsequent protests in Ferguson, Missouri. That Oliver wrings any laughs from such a devastating situation is remarkable in itself, but he also managed to report on aspects of the situation that had gone largely unnoticed, particularly concerning the rampant militarization of local police in America.

I just caught up with this BBC miniseries on Netflix last week. It’s terrific and, at eight episodes, digestible in just a few sittings. The standout episode is the show’s fourth, a full hour of flashbacks to events that characters discussed vaguely in the preceding three episodes. As the events that play out defy expectations, the entire purpose of the show shifts before our eyes.

Note: This show is now available to stream free on Netflix.

In many cases, the episodes on this list diverge from their respective shows’ conventional rhythms. This episode is perhaps the best example. The dual flashback structure offers the most affecting glimpse yet of Maura’s life pre-transition while simultaneously clarifying and complicating Gaby Hoffmann’s Ali. The brief foray into surrealism feels organic rather than contrived.

Note: This show is now available to stream free on Amazon Prime.

Just when I thought New Girl had permanently run out of gas last season, the show came back swinging this fall. No longer burdened by the Nick-Jess relationship, the writers constructed the thinnest of plot frames each week and then let their actors go to town. And they did, as in this episode, in which the loftmates are confounded by the arrival of their new landline phone. Combined with the introduction of Jess’ potential new beau Ryan Geauxinue (and yes, it’s funny because it’s sexual), this episode brought genuine laughs where last season brought exhausted sighs.