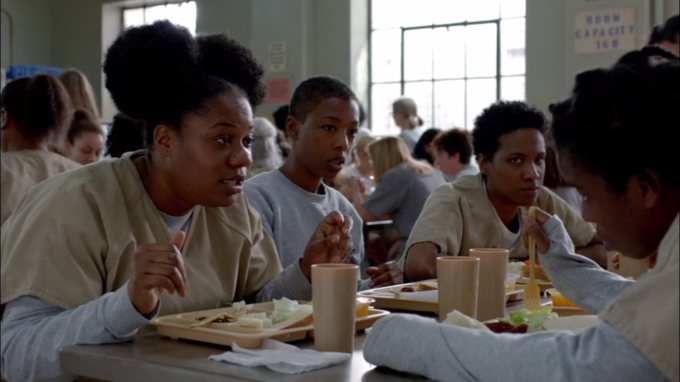 The third season of Orange is the New Black (which arrived three hours early on Netflix tonight) opens on a sex joke – nay, several jokes about bad sex jokes. Thus begins one of the most loosely plotted episodes in the show’s history.

That’s a smart move on the part of Netflix and showrunner Jenji Kohan. The structure of a television season that unfolds weekly need not apply to a television season that’s intended for speed-consumption (I’ve been trying to purge “binge-watching” from my vocabulary, with mixed success). As soon as the first episode is finished, you can cue the second one without even lifting a finger.

It’s smart, then, for OITNB to return on an episode that immerses viewers in its richly detailed world without submerging it in a sea of intertwined plotlines just yet. And Orange, more than most shows, sustains such an approach. Seeing all of the Litchfield inmates again is like being reminded of a group of old friends you haven’t thought about in a while. For a few minutes, all you can do is think about the good times and the great one-liners. Then reality sets in, and you remember that sometimes you had issues with those friends. Or rather, that they had issues of their own.

Those issues fuel the tension of Orange is the New Black. Suzanne is reeling (or rather, refusing to reel) from the loss of her manipulative matriarchal figure Vee (Lorraine Toussaint), who died in tandem with the cancer-ridden Rosa and a Litchfield van at the end of last season. Sophia frets over the prospect of being reminded that she once celebrated Mother’s Day for others and not herself. Pennsatucky regrets aborting her children. The list goes on…and on, and on. This show has a deep bench and a fully populated world. At this relaxed pace, it takes time for everyone and everything to come into focus. 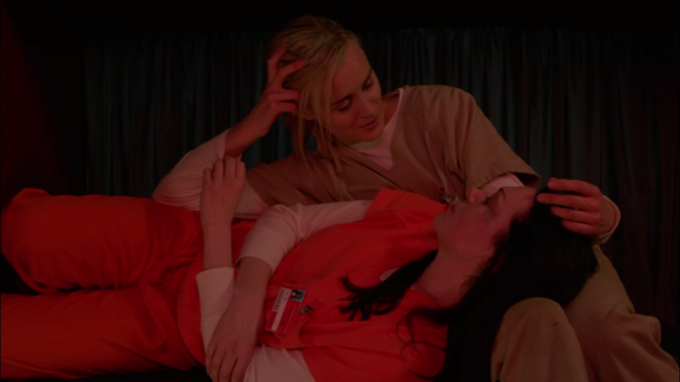 Even Piper (Taylor Schilling) and Alex (Laura Prepon), billed and marketed as the show’s leads, get time equal to almost everyone else’s in the premiere. The days of entire episodes informed by Piper’s privileged worldview appear to be in the past. She worked well as the show’s entry point and even better as an important piece of the puzzle in season two (thanks in part to Schilling, who’s much better than she’s often given credit for), but the story of the show appears to have shifted to a larger one about shaping and maintaining a community.

That theme even extends beyond the show’s much-discussed focus on female perspectives. Healy, Caputo and Bennett have become fully-formed characters with their own strengths and weaknesses. They’re part of the Litchfield ecosystem, which rests on tenuous foundations but has reached a temporary moment of relative tranquility. The show depicts and extends empathy to everyone in its cast, and then watches as the characters expand upon or squander that empathy.

I don’t expect that the rest of the season will be languid as this premiere, nor do I want it to be. But it’s nice to see a show find a suspense technique so far removed from the “What happens next?” model that’s become de rigeur for serialized storytelling. Instead, Orange is the New Black asks, “How are these people doing?” and “How do they feel?” Last season, plot became increasingly important as the season grew longer and Vee grew stronger. Perhaps a similar tightening of the screws is in the works for future episodes. But for now, we’re back in Litchfield and the characters are as interesting as ever. Best of all, the premiere gives us time to appreciate them.

Note: I’m not planning to speed-watch this season quite as fast as the presence of all 13 episodes suggests I could. I enjoy Orange is the New Black enough that I’d rather not confine the experience of watching episodes for the first time to be relegated to one weekend of every June. But I’ll update my progress every so often on this blog.