My Tweets
Posted on September 17, 2015 Television

BoJack Horseman is about BoJack Horseman, the washed-up star of a popular 90s sitcom who lives in Los Angeles, spending his days grappling with the reality of his dwindling fame and chronically minimal self-esteem. He has a cavernous home, a loyal roommate, an enterprising agent, no friends, inconsistent job prospects and a streak of self-destructive behavior that keeps his closest acquaintances and confidants at a remove. He’s sad, lonely, bitter, sarcastic, self-serving, unfaithful and deeply, painfully, perpetually depressed.

If he were the subject of a live-action comedy or drama, you might find him deplorable, or at least unwatchable. But the key is, he’s not just a man. He’s also a horse. And the show around him is a horse of a different color.

Dressing up loathsome characteristics with playful animation isn’t a substitute for developing interesting relationships between complex people. But the Netflix series BoJack Horseman doesn’t rest on the laurels of its colorful presentation. It’s an animated show that takes full advantage of the creative freedoms of its medium, packing visual gags, puns and in-jokes into every frame of its tightly constructed 25-minute episodes. It could be enjoyed purely on the level of aesthetic creativity. The show is as fun to look at and get lost in as it is to watch.

But the fun of the moment-by-moment makes the underlying complexities easier to stomach and more satisfying to digest. The show doesn’t position BoJack as a guileless rogue who you love to hate. He’s a broken man learning not to hate himself. The show begins as a typical study in the excesses of American upper-class masculinity. But as time goes on, it’s increasingly focused on the challenges of balancing mental illness, ill-advised impulses and unimaginable wealth. Bolstered by a tremendous vocal performance from Will Arnett, who adds shading and nuance to BoJack’s varying degrees of misery, BoJack Horseman watches as its main character achieves success in every area of his life, then squanders it. He’s not unlike the Walter White of show business, except his meth is stardom, and his family is himself. (Metaphor in progress.)

If that doesn’t sound like the makings of a pleasurable binge-watch, rest assured that the show BoJack Horseman doesn’t wallow in its characters’ neuroses and insecurities nearly as much as its main character does. Part of that responsibility falls on a vibrant cast of supporting characters, who add extra dimensions to the show’s emotional and satirical spectrum. There’s Princess Carolyn (Amy Sedaris), BoJack’s enterprising feline agent who’s at a professional and personal crossroads as she barrels towards middle age. There’s Todd (Aaron Paul), BoJack’s sweet-faced roommate who’s desperate for attention, or at least a comfortable place to rest his head. There’s Mr. Peanutbutter (Paul F. Tompkins), BoJack’s canine professional rival who’s outlook on life is as optimistic as BoJack’s isn’t.

Perhaps best of all, there’s Diane (Alison Brie), a ghostwriter hired to help BoJack with his memoir in the first season, and later torn between professional ambitions and the comfort zone of her solid partnership with husband Mr. Peanutbutter. In a media landscape often tempted to reduce women to archetypes, stereotypes and plain old types, Diane stands out with equal parts ambition and insecurity. She gets to be a person independent of her relationships with her husband and with BoJack, with whom there’s a brief but quickly terminated flirtation in the first season, and a knowing friendship in the second. An episode in which Diane sets off a national controversy by reminding the public about a Cosby-esque sitcom star’s long-buried misdeeds is particularly notable in this regard, and successful in showing how power structures in Hollywood and across America leave women behind. Feminism would seem to be on a low list of priorities for a show primarily about a white man in horse’s clothing, but BoJack Horseman uses its lead male perspective to bring awareness to a host of complex women – some human, some feline.

The spread-the-wealth storytelling approach that gives Diane such richness is on display throughout the show, which toggles deftly between satirizing Hollywood vanity, exploring its warped animal-human hybrid universe and smoothly transitioning from punch lines to gut-punches. An intermittent series of flashbacks to BoJack’s childhood are particularly poignant. And characters who initially appear throwaways, like the thoughtful deer Charlotte (Olivia Wilde) gain significance in surprising ways. And the show’s tech specs are spiffy as well, from the gorgeous simplicity of the animation to the wonderfully modulated array of celebrity cameos.

Creator Raphael Bob-Waksberg has talked about approaching this show from the perspective of doing the silly things people expect and then undercutting them with serious emotions. It’s heartening to watch a show fully confident in its ability to tackle both ends of that spectrum, often simultaneously. BoJack Horseman will make you laugh and cry in the same minute. Sometimes you’re not sure whether to laugh, cry or gasp. Rare is the show that offers so many opportunities to do all three.

The show’s biggest leap from funny to verging on profound is a deeply felt series of flashbacks to BoJack’s pre-fame days, featuring the always-welcome voice of Stanley Tucci as BoJack’s ailing mentor Herb Kazzaz.

The “hallucination” episode – many shows have ’em, few shows know what to do with ’em. This one does, and it’s beautiful/hilarious/tragic to watch.

Structured like the Mad Men episode “Far Away Places,” in which three different stories play out parallel to one another, one at a time, this episode provides the comedy spectacle of Vincent Adultman fooling Princess Carolyn and Todd observing a passionate romance between Carolyn’s phone and his own. But the episode’s centerpiece actually comes in the final third, when Diane confronts Mr. Peanutbutter for throwing her a surprise party she didn’t want. It’s one of the most devastating depictions of relationship strife on television, and one half of the couple is a talking dog. Amazing. 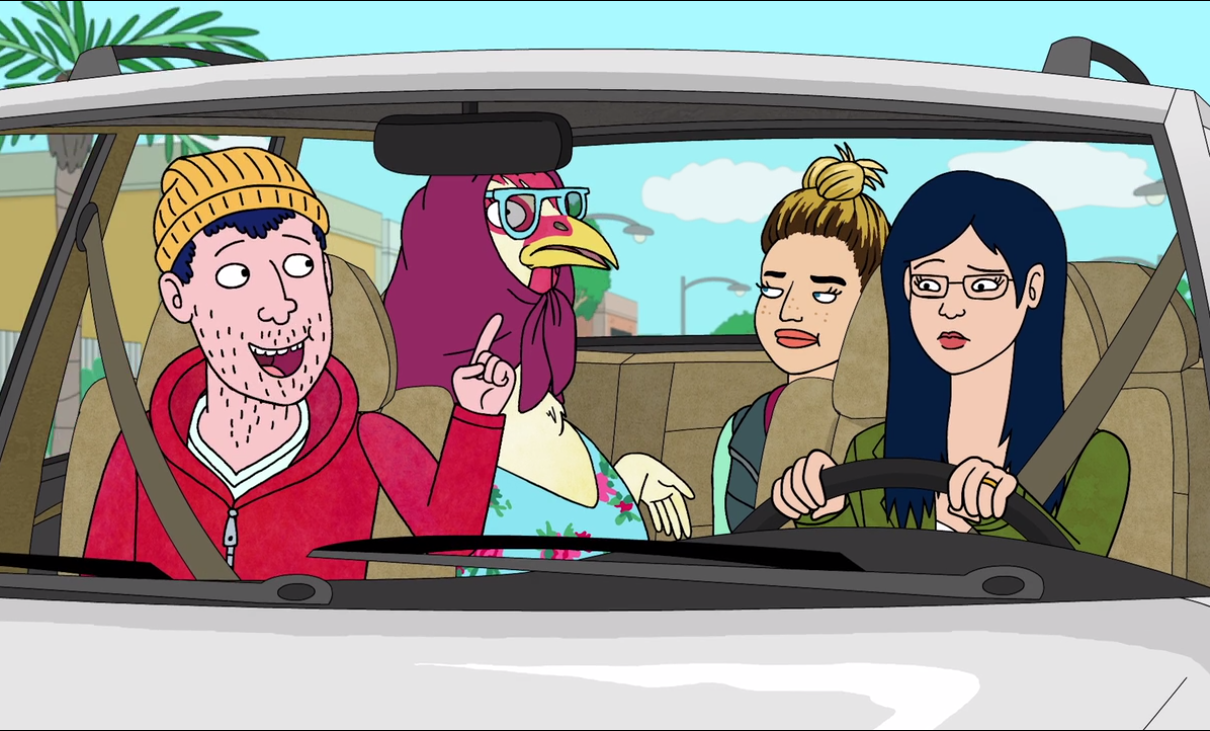 If you were wondering what constitutes meat in a world populated by talking animals, this episode answers that question in gruesome detail, folding in a critique of the American food industry along with a memorable guest appearance by the voice of Amy Schumer.

This tour de force is at once a spot-on parody of the best and worst impulses of screenwriter Aaron Sorkin, a metacommentary on the artifice of television shows and celebritiesm, and the culmination of one of the series’ most complicated and interesting conflicts, between the dogged optimist Mr. Peanutbutter (I had to) and the relentless pessimist BoJack. Plus: Daniel Radcliffe! (Who?)