I’m not the right age to have Star Wars imprinted on my DNA. I’m too young to have seen the original movies when they stormed theaters from 1977 to 1983, and too old to look past the tonal and narrative flaws of the prequels. Star Wars: The Force Awakens is a movie I wasn’t particularly clamoring for and didn’t really need. I like the originals just fine and found the prequels interesting as a fill-in-the-blanks exercise, but the cultlike devotion to the franchise has always eluded my grasp.

That’s not to say I wasn’t swept up in the multimillion dollar hype machine for this decade-in-the-making sequel, the first Star Wars movie produced without the guiding hand of creator George Lucas. I’d have to be made of stone not to feel some enthusiasm the sight of the movie’s young stars Daisy Ridley and John Boyega parading across the late-night talk shows or the typically taciturn Harrison Ford grinning from ear to ear at the climax of the teaser trailer. But I watched approvingly from the margins, regarding the entire spectacle as another uncomfortable mix of creativity and commerce. I never fully engaged with the excitement, even as I recognize, respect and appreciate that others did.

(Avoid reading the rest of this review until you’ve seen the movie. I spoil some things.)

Having now seen the new Star Wars movie (a phrase that would have been unthinkable to write five years ago), I feel much the same way. Which is to say, I liked it! Director J.J. Abrams and screenwriters Abrams, Lawrence Kasdan and Michael Arndt have shouldered the weight of sky-high expectations, delivering a movie that boasts striking visuals, appealing characters and a generous helping of nostalgia. I left the theater feeling happy, both for the fans who have swallowed this new story like catnip, and for casual fans like me, who just want Star Wars movies to provoke curiosity and instill a sense of wonder. At its best, this movie does both.

Not unlike several other movies in J.J. Abrams’ filmography, Star Wars: The Force Awakens starts with a terrific first act and then flags a bit around the midway point. Plot points, themes and even shots from A New Hope form the backbone of the story, sometimes adding poignancy to the overall narrative, other times robbing the movie of suspense. It’s exciting to see many of the characters from the original returning at unexpected times, but they start to overcrowd the movie’s fresher aspects by the end. It’s clear that this movie is clearing the decks to chart a course for future episodes, but that kind of setup detracted from my experience of this movie as its own movie.

Never mind the quibbles for now – the first act is something special. Every Star Wars movie begins with the famous logo and then a preamble crawl, and this one is no exception. From there, this reboot rolls out the new characters in quick succession: Poe Dameron (Oscar Isaac), a roguish captain in the Resistance rebels; Finn (John Boyega), a Storm Trooper in the process of defecting; and Rey (Daisy Ridley), a young woman fending for herself on Jakku while she waits for her departed family to return. The movie’s most affecting moments come in the grace notes of these character introductions: Poe tenderly sacrificing his safety for the sake of the android BB-8 (more on him in a moment); Finn whooping with glee when he successfully operates a missile during a firefight; Rey guzzling water from a canteen as she hauls her wares. A later sequence involving a cantina and a wizened creature played in performance capture by Lupita Nyong’o strikes similarly effective world-building notes. More so than the fully realized archetypes of the original trilogy, these new characters are people, and the movie works best when it treats them as such.

Soon enough, as the title demands, the Force must awaken. A new class of Storm Troopers, overseen by the masked and hooded Darth Vader descendant Kylo Ren (Adam Driver), have formed the First Order, and they have their eyes on conquering — what else? — the galaxy. It’s up to Rey, Finn and Poe to stop them, with the help of some movie legends off the bench: Han Solo (Harrison Ford) and Chewbacca (Peter Mayhew), followed later by Leia Organa (Carrie Fisher) and C3P0 (Anthony Daniels). The goals: stop the First Order from blowing up large portions of the galaxy; restore order and justice to a world increasingly gripped by fear and darkness; and, if there’s time and energy left over, find the MIA Jedi master Luke Skywalker (Mark Hamill).

This review contains spoilers, but this isn’t one of them: our heroes accomplish all of those goals. There are consequences, most heartbreaking among them the (THIS is a spoiler) death of Han. But a nagging sense of familiarity creeps in as the plot winds towards the only imaginable conclusion. It’s one thing to pay frequent stylistic homage to A New Hope, as this movie does to stirring effect on many occasions, with iris wipes and shot-for-shot callbacks left and right. But it’s another to mimic the story beats of the original so closely that hope for a twist or a surprise is futile. The climax and subsequent celebration lacks the weight it might have had with a more surprising lead-up, even as the execution of individual scenes — the culminating escape sequence, the culminating space battle, the culminating light-saber battle — works well. The First Order doesn’t feel distinct from the villains in the original movie, even with Driver giving his unsettling best as an unhinged psychopath. The Starkiller Base is just a big Death Star, as one of the characters in the movie remarks. 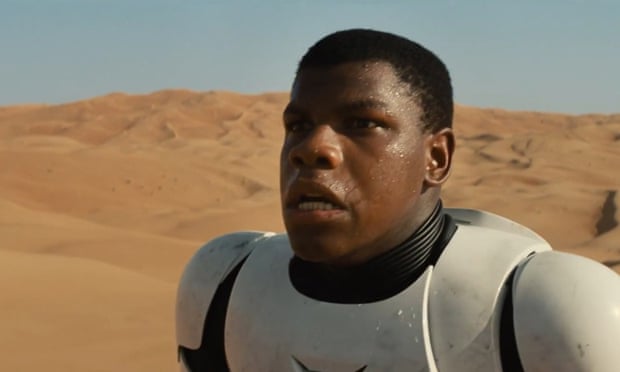 Even when their presence threatens to hold the movie back from scaling new heights, the old performers don’t phone it in. Harrison Ford has never looked happier to be in a movie franchise about which he’s often expressed disgruntled ambivalence. The eternally spectacular Carrie Fisher makes the most of her too-short screentime. Daniels and Mayhew haven’t lost a beat. (Hamill speaks nary a word during his 30 seconds onscreen, for which he infuriatingly earns second billing above Fisher and the young stars. I’d kill to have been in the room for that negotiation.) Meanwhile, the newbies more than earn their keep. Ridley and Boyega have more energy and charisma in a single frame than Hayden Christensen and Oscar winner Natalie Portman did across an entire trilogy. Isaac’s wily line readings bode well for what I hope is an increased presence in the sequels. Nyong’o and Gwendolyn Christie make strong impressions in a performance-capture suit and under a helmet, respectively. AND BB-8 IS MY NEW FAVORITE MOVIE CHARACTER OF ALL TIME. (Okay, no. But he’s two hunks of spherical metal and I somehow found that adorable.)

To complain about what this movie might have been is to ignore the many pleasurable things that it is, and didn’t have to be. Unlike the vast majority of modern Hollywood blockbusters, this one has the good sense not to get bogged down in existential despair. The characters smile, laugh, joke and celebrate as often if not more than they glower or cower. Unlike most of the recent Marvel movies, the stakes are human-scale — even during the climax, when the threat of detonation looms, the editing pays as much attention to the people who could be victims as it does to the action itself. Unlike the Star Wars prequels, there’s no threat of CGI overload, no racist undertones or overtones, and not even a stray reference to tax policy. And unlike every previous Star Wars movie, the most powerful and heroic character is a woman, one who rebukes any man’s attempt to take control of her story. (What could end up being the highest-grossing movie of all time stars a young woman and a black man in two of the most sympathetic and integral roles. Let it never be said that people won’t see movies starring people who fit those demographics, or any others.)

Episode VII is a well-crafted and loving homage that occasionally rises to greater heights, and overachieves in areas where several 2015 blockbusters didn’t. There’s room in Episode VIII, to be directed by the visionary Rian Johnson, for experimentation and innovation. For now Star Wars is back, guzzling dollars and dwarfing box-office records. That it’s more than good enough, and promising for the future, is a bonus.