When Breaking Bad departed from television in a trail of crystal blue persuasion last September, television lost its center of gravity. At the time, this development seemed troubling. Without a consensus show around which to rally on social media, television fans and critics alike had to search elsewhere to find a show worthy of their devoted attention and undying affection. But a year removed from Walter White’s final blaze of glory, the loss of Breaking Bad seems more like a gift.

The consensus about this year’s television is that there is no consensus. END_OF_DOCUMENT_TOKEN_TO_BE_REPLACED

At least since he became one of Hollywood’s Most Important Directors, Christopher Nolan has directed movies about ideas, not people. In Inception, he asked questions about the nature of dreams and the politics of intertwined narratives. In The Dark Knight, he challenged the nation’s attitudes about terrorism and urban corruption. In The Dark Knight Rises, he seized upon the prevailing notions of the inequality gap in the American rhetoric. And in Interstellar, he sets his sights outward, heading into the great beyond for the first time. He comes back with three hours of gorgeous imagery and solid performances tied together by a script that strives for emotional catharsis and falls far short.

END_OF_DOCUMENT_TOKEN_TO_BE_REPLACED

After an entire TV season of speculation, the 2014 Primetime Emmy nominations were finally announced at the ungodly hour of 5:30am Pacific Thursday morning. (Perks of being on the East coast: waking up was no big deal!) As usual, the nominations provoked a mixture of reactions: surprise, resignation, disapproval, even bitterness. As Alan Sepinwall put it in his pessimistic but reasoned analysis, the television business is evolving too quickly for the Emmys to keep up, especially given that the TV Academy has a history of being slow to adjust to major changes in the industry. With a higher volume and wider array of TV shows than ever before, some quality shows are always going to get left behind. But when the Emmys continue to make apologies for shows that they previously loved, it’s worth wondering how long these awards can stay relevant.

Below, here are five of my thoughts about the nominations list. For more on the list’s weirder surprises, here’s my USA Today article from Thursday. For my dream ballots, click here and here.

END_OF_DOCUMENT_TOKEN_TO_BE_REPLACED

This week on The M&M Report, Devin Mitchell and I were honored and thrilled to speak with RogerEbert.com film critic Susan Wloszczyna. She shared plenty of great stories about interviewing celebrities as wide-ranging as George Clooney, Amy Adams, Peter O’Toole, Mel Brooks and Wes Anderson, among dozens of others. Plus, she offered insights on the business of film criticism and the state of modern movies.

Leave a comment Posted on March 20, 2014 Television, The M&M Report

Click here to listen to Episode 24 of The M&M Report.

Spring break is over, and The M&M Report is back! This week, Devin Mitchell and I discussed and debated Fox’s little-seen, critically acclaimed comedy Enlisted. Is the show on par with the best of network comedy, or is it merely a promising freshman with room to grow? We attempted to answer these questions and more.

After that, Devin and I returned to True Detective. We discussed the first four episodes a few weeks ago, and now we’ve got thoughts on the first season as a whole. Bonus: we make our dream picks for the cast of season 2.

Next week, we’ll be back with more pop culture commentary. Thanks for listening!

END_OF_DOCUMENT_TOKEN_TO_BE_REPLACED

If there’s an Emmy for starting conversations and stirring debates, True Detective has it in the bag.

The first season of True Detective, HBO’s eight-part anthology series set in the Louisiana bayou and starring Matthew McConaughey and Woody Harrelson, became such a lightning rod for the first few months of 2014 that the final episode, which aired on Sunday night, could not possibly have lived up to the anticipation and enthusiasm. When the series began, much of the praise was focused on the performances, with McConaughey cementing his recent cinematic resurgence and Harrelson quietly matching him in sheer intensity and charisma. By the end, the discussions had shifted to issues of race, gender, serialized storytelling and thematic priorities.

The show’s merits are a separate, though related, issue. The finale confirmed that series writer Nic Pizzollatto was far less interested in constructing and then unraveling an intricate mystery than he was in observing the evolution of two characters over nearly two tumultuous decades. For fans who were hoping for and expecting a mythologically charged payoff, the result must have seemed disappointing. But for people who were content to dig into the opposing moral philosophies and questionable fashion choices of Detectives Rust Cohle (McConaughey) and Marty Hart (Harrelson), the season delivered.

END_OF_DOCUMENT_TOKEN_TO_BE_REPLACED 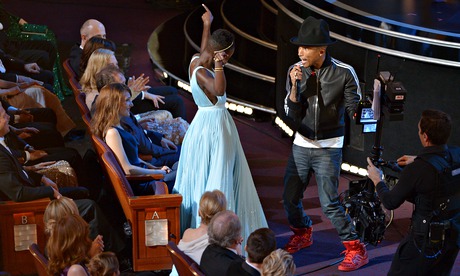 Listen to Episode 23 of The M&M Report here.

This week on The M&M Report, Devin Mitchell and I sat down as soon as the Oscars to unwind with thoughts on Ellen DeGeneres, Lupita Nyong’o, Steve McQueen, Matthew McConaughey, Cate Blanchett, pizza, selfies and much more.