My Tweets
Leave a comment Posted on June 24, 2016 Television, The M&M Report

Devin and I welcomed returning guest Erin Vail for a discussion of D.C. TV shows, prompted by the series premiere of BrainDead and the excellent fifth season of Veep, which wraps up on Sunday.

Don’t forget, you can now subscribe to our podcast on iTunes and download the feed directly into the podcast app of your choice. If you have the time, rate and review us on iTunes as well. We’d greatly appreciate your support. 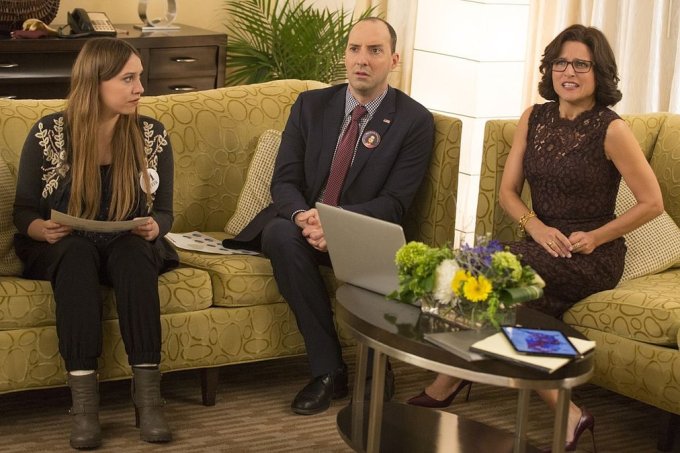 This week on the M&M Report, Devin and I welcomed returning guest Kevin Werner to discuss the fourth season of Veep, which ended its ten-episode run on HBO this past Sunday at 10:30.

We talked about the highs (Jonah and Richard, the cult of Tom James, the plight of Catherine Meyer) and the lows (fuzzy electoral math, overly dense finale plots) of this season, and we touched on our expectations for the next one, the first under replacement showrunner David Mandel.

The show’s creator Armando Iannucci is moving on from the show. He explained why in an interview with the Hollywood Reporter. Another piece worth your time: former senior adviser to the president Dan Pfeiffer argues on Grantland that Veep is America’s most realistic show about politics.

Devin and I last discussed Veep during its third season in 2014.

Note: Devin and I are testing out a new M&M Report approach: one topic per episode. This week’s entire podcast is about Veep, with spoilers aplenty. Tune in next time for more.

I’m missing out on a moment today.

When House of Card debuted to considerable fanfare last February, I did not have access to a Netflix account or the money necessary to acquire such access. I observed from the sidelines as the binge-watchers tore through each episode, finishing the series within one weekend. I observed as the show faded from the pop culture conversation as people moved on to other things (binge-watching Arrested Development). I observed as binge-watch skeptics (I would count myself among them, to an extent) finished the series at their own leisurely pace. I observed as the show became the first streaming-only, television-scale scripted series to merit serious consideration at the Emmys and the Golden Globes.

And then I was granted access to a Netflix account. But I didn’t start with House of Cards. I started with Orange is the New Black, by far the most warmly reviewed series of Netflix’s modern foray into “television.” Then I worked my way through the dense fourth season of Arrested Development, marveling at the massively complex puzzle structure while sometimes wondering why it had been seventeen minutes since I’d laughed.

And finally, I got to House of Cards.

I watched four episodes. I might have watched more, but the end of winter break and the beginning of my spring semester loomed. Tough decisions had to be made. And I decided I’d seen enough of House of Cards to know that I wasn’t clamoring to finish it.

END_OF_DOCUMENT_TOKEN_TO_BE_REPLACED

As of this week, The M&M Report has migrated to The Eagle, American University’s student newspaper. Devin Mitchell and I are very excited to bring the podcast to a larger audience, but our regular followers needn’t fear that we’ll be selling out as a result. The M&M Report will still be your source for pop culture analysis that strives to be both fun and substantive.

This week, Devin and I talked about The West Wing. Devin loves this show with an emotionally invested passion with which I wouldn’t dare compete, but we had a lively chat about the show’s merits, a few of its flaws and our favorite episodes.

After that, we ushered in the triumphant return of Devin Doesn’t Like Things. This week, Devin is fed up with the incessant parade of awards shows and their surprisingly troubling implications.

Next week, we’ll be back with special guests and much more. Until then…thanks for listening!

END_OF_DOCUMENT_TOKEN_TO_BE_REPLACED

I won’t bury the lede: I’ve started a podcast! And I’m not doing it alone. My co-host Devin Mitchell and I are very excited to introduce the first episode of what we hope will be a weekly show. Each week, we’ll discuss topics in popular culture – mostly television, but we’re not opposed to discussing movies or any other pop culture that strikes our fancy.